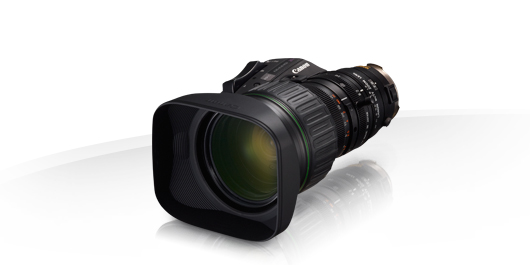 The KJ20x8.2B KRSD is a 2/3"portable telephoto HD lens with extra wide angle that provides outstanding optical performance and value in a compact design.

The new KJ20x8.2B KRSD is a portable 2/3" HD Standard lens specifically designed to support low-cost image acquisition systems for a wide range of applications and users such as wedding and corporate videos, education films and documentaries.

At 8.2-164mm, the new KJ20x8.2B KRSD, covers a generous range of focal lengths. Along with the KJ20x8.2B IRSD, they are Canon's widest lenses in the affordable 20x zoom class. MOD is 0.9M and the KJ20x8.2B KRSD comes equipped with a macro to allow closer subjects up to 10mm from the front of the lens. It also has strong rugged build qualities.

The servomotor has a noise-suppressing construction to ensure there is no corresponding increase in noise. The newly developed advanced drive unit includes an interface function for chromatic aberration compensation. The Memo switch on the drive unit, which sets specific zoom positions for the Shuttle Shot function, has been changed to a push switch. The memo switch enables more reliable Shuttle Shot setup in the field where more consistent functioning of the controls is required.

Together, these technologies and materials have produced an outstanding combination of cost-effectiveness and performance in the KJ20x8.2B KRSD. The lens has minimised axial, and lateral chromatic aberrations, which can be reduced further with 'the chromatic aberration compensation function' that is built-in to the Drive unit. Coma aberrations and geometric distortion are well controlled. The new optical materials and multi-layer optical coatings used in the lens effectively lessen the ghosting.

The KJ20x8.2B KRSD also has a high MTF (modulation transfer function) at the picture centre that is well controlled right out to the picture extremities. The KJ20x8.2B KRSD 's optical performance is well-balanced for both near and distant subjects, surpasses previously available lenses in this price range.